McDonald’s Rolls out New McChicken: McDonald’s announced that it has launched its McChicken Biscuit as well as the Chicken McGriddle countrywide. In July of this year.

McDonald’s released only breakfast sandwiches in specific locations throughout the United States, but McDonald’s has announced that these two are available nationwide for a short period of time. Customers will be able to buy one or the other during breakfast time. 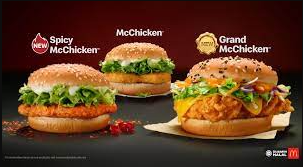 Users can install the McDonald’s app for their mobile devices to place an order for breakfast online and avoid the lines using McDonald’s Mobile Order & Pay feature. Official site

If you’re at a McDonald’s drive-thru and you are seeking healthier alternatives to eat, look up this list of 8 McDonald’s healthy options.